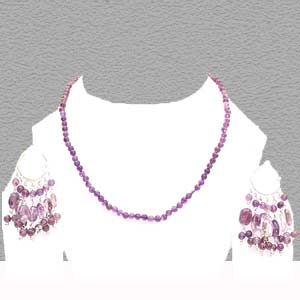 It is a handcrafted, silver amethyst jewelry set, consisting of a beaded necklace and pair of lovely earrings.

The stone with its purple hue has been admired since olden times. It found a place in the British Crown Jewels and also adorned Catherine the Great of Russia and Egyptian Royalty.

The regal stone believed to encourage celibacy and piety is a popular accessory amongst bishops. In Tibet, amethyst is considered sacred and is used to make rosaries.

Regarded as the anniversary stone for the fourth and sixth year of marriage, it is beneficial in strengthening immunity.